Mediterranean Experience
There is a point in Italy where, arriving by sea, the coast seems to transform itself into a smile. This is what gave us the idea that both sea and quality need to be available to everyone.

If business is in the family
Every choice is a personal one and every decision respects a memory, with all choices being carefully made by those who will be reaping the benefits of this labour.
Canning is looking after.

Innovation is the idea
Making a simple, healthy and varied diet available to everyone; promoting it through the respect that a modern outlook owes to solid experience.

The origins
Genoa, 1918: Igino Mazzola founded his one-person business specialising in exporting fish and fish products. Sanctions applied to Italy following the conquest of Ethiopia slowed down relations with other countries and forced him to diversify his business. He decided to invest in a sea with an even greater oily fish population, the northern Adriatic, and he bought a plant to process sardines and oily fish in Marano Lagunare, in the province of Udine.

The cannery and fishing community
The company’s story became interwoven with that of the fishing community and with the women of Marano, who would prepare the catch. The facility at Marano Lagunare was renovated in 1938, when the area was very poor and the local people practically existed on just the small amount of fish offered up by the lagoon. There were few fishing boats and so Igino Mazzola built a new fleet of 18 crafts; and even today, some of these boats are remembered, like the “Teresina prima”, the “9”, the flagship “IGMA”, the “5”, and the “Alex”.
From Istria came expert fishermen to teach those in the lagoon how to fish in deep sea waters, overcoming the exceptional difficulties caused by war. Mazzola therefore, was able to create crews who within a short time, had become skilled fishermen in the Adriatic, bringing wealth to the community and also boosting the local fish market. The fleet was then sold back to the same fishermen, who became owners and also continued to provide the base for the raw materials needed by the cannery. The relations between the factory and the community are based on the rituals and written rules in the Regulations governing the fishermen of Marano, signed by the town’s mayor in 1899.
This document testifies to the tradition of mutual solidarity and ethics governing relations between the sea and those who make their livelihood from it: it deals with the fish species to be caught, methods used to assign the “seraia”, i.e., gathering in an area of the Lagoon.
Even today, relations with suppliers are based on trust and a shared sense of ethics, a code of the sea, reinforced with business expansion and market evolution and a rigid Quality system that uses documents and procedures to guarantee quality standards. As well as Marano, in that period, the company set up other plants in Lisignano and Isola di Sansego (Istria) as well as on the Adriatic shore, at Porto Tolle, in the province of Rovigo.

The post-war period and tuna canning
The sardine cannery broadened the product range to include eels, mackerel and tuna. Although the fleet and the two canneries in Istria were lost in the post-war period, in 1948 Igino Mazzola experienced a rebirth, investing in technology and becoming a public limited company.
In 1958 the 100-gram Maruzzella brand was created and single-portion formats revolutionised the tuna market. The new challenge faced by Igino Mazzola passed from the decision to process a branded consumer product that was hard to come by. In that period, investments focused on the possibility to source raw materials, purchasing from the Japanese fleet fishing in the Atlantic.
A decade later, a cannery in Loano with the brands Peschereccio and La Pinta was purchased from Italian Company Pisonis.

Packaging innovation
Once quality standards were guaranteed, innovation began to focus on packaging, the modern means of promoting new style in food. The Maruzzella brand was launched on the market in 1958, in 100 and 200 gram cans, a ground-breaking moment for production in Italy and in the world, with its single-portion formats in a period when tuna was still canned in formats over one kilo.
Tuna in oil was once packaged in barrels or even, like it is today, sold in 5 or 10 kg cans. Manufacturers were generally used to placing the most current product in cans of less than a net kilo, while La Mazzola envisaged that future consumption would be orientated towards even smaller formats, perfecting the canning of the brand in net weights of 100, 200, 300, 400, 800 grams only, with controlled weight and price using only carefully prepared prime ingredients, with even quality, allowing it to become successfully established with a top-quality, constant product at affordable prices.

In the 1970s, the company was the first to start using the aluminium can with white enamel interior: aluminium does not rust, has a much easier opening – without oil splashes – and makes it easier to empty the can. In the early 2000s, to meet market demand (top quality and competitive prices), the company began producing abroad, giving up on aluminium (which not all factories could use), in favour of steel, as used by all the other manufacturers.

Variety and the global marketplace
Today, Igino Mazzola SpA distributes the quality of its selections on both EU and non-EU markets, continuing to take on board new consumer tastes, which increasingly focus on a varied diet.
Our canned products bring 13 species of fish to tables the world over, through an increasingly capillary sales network.
Company choices continue to be dictated by traditions passed down over many years in business.

We have our own idea of innovation: to promote simplicity, satisfying the needs of a changing world. What was once reserved to the few has become part of daily living, and this is what we see as the largest revolution in cuisine through the centuries; in our own small way, we have been part of that, creating modern formats that have changed the style of hospitality and consumer habits, making it easier to serve fish at home.

Our preservatives: cold, heat and salt
There is no need for chemicals to preserve nutritional integrity.

Ice brings distant seas closer
Ice as a preservation means allows fish to travel to us, maintaining its properties. This process dates back to around 1850, when fish began to travel around the US in chilled wagons. In that period, fish began to become a widely consumed food, as cold technology began to revolutionise consumption, making it more democratic.

Heat, energy in its pure state, allows us to create our canned fish.
Steam purifies the fish and stabilises its specific nutritional values, so that we can store it. This means the kitchen is now able to adapt itself to new rhythms of life and not the other way around.

Salt: a precious aid from the sea
As well as adding to flavour, salt replaces heat for some products, such as anchovies. This simple ingredient on our tables has been used as a preservative for centuries. How does it work? Salt absorbs water from food, which remains “dehydrated” to the point that the common microbial flora that cause foods to perish can no longer thrive.

Our quality. Your choice.
Fish is a precious foodstuff which, at its best, should be consumed with creativity: variety, in fact, ensures wellness. Igino Mazzola S.p.A. has specialised over four generations in the selection, preservation and sale of sardines, salmon, mackerel, tuna, cod, anchovies and clams.
We have packaged and distributed them for you to make it easy to choose and consume each of the sea specialities. We have developed protocol over time to guarantee not only the quality, flavour and nutritional content of our products, but also to ensure compliance with the production specifications of our suppliers and consumer safety. We believe in the eco-sustainability strategy of tuna fish in the oceans to contain catches and thereby promote re-population of the species.

We give each of our consumers a choice.
The delicacy of the Yellowfin quality for gourmet, the product fished from the hook for those seeking traditional methods as a further guarantee of sustainability, convenient solutions for a curious diet with the possibility of changing eating habits, for personal wellness and the sustainability of the environment: for us each choice should be respected. We look to offer new opportunities to consumers with an increasing modern flare. For this reason, we continue to always and only invest in the sea, in the fishermen’s trust, in the wealth of the ocean and its boundless qualities; to offer new occasions to consumers with an increasing modern flare.

We bring a simple recipe to the table, one that has been passed down over four generations: fish, olive oil and salt. A well-balanced dish that makes it easy for even the youngest consumers to enjoy sea foods: no fishbones, no scales and no waste. Behind the simple fact of being able to enjoy food that we prepare with such care and attention, is the secret of every kitchen: a delicate balance of experience, skill, food science and technology.

This is what happens in our kitchen:
– Fish comes in from our trusted suppliers, protected by the most natural conservation technology: cold. As soon as the fish has been caught, it is chilled to slow down the chemical and biological processes that would cause it to deteriorate.

– The flesh is selected according to its appearance, colour and consistency.

– The fish is then cooked and cleaned to provide the consumer with the edible part only. This stage is still carried out manually by expert staff.

– The fish is then salted (to bring out the full flavour) and a mild olive oil is added so as not to affect its characteristics.

– Automatic portioning machines help operatives to dose the fish, keeping the muscular structure as intact as possible inside the can. This is what makes our products look whole.

– To guarantee safety and to maintain the organoleptic characteristics of the fish as long as possible, cans are hermetically sealed by cleating machines.

– Large pressure cookers (not very different from the ones we use at home) heat the cans so that the contents are stabilised and preserved over time. Without additives or preservatives.

The product is then a canned food. Computers, replacing the large timer used in traditional cooking, regulate the heat sterilisation process with the precision that only progress can provide, guaranteeing food safety of a level unknown only a century ago.

Source of informations and images: tonnomaruzzella.it 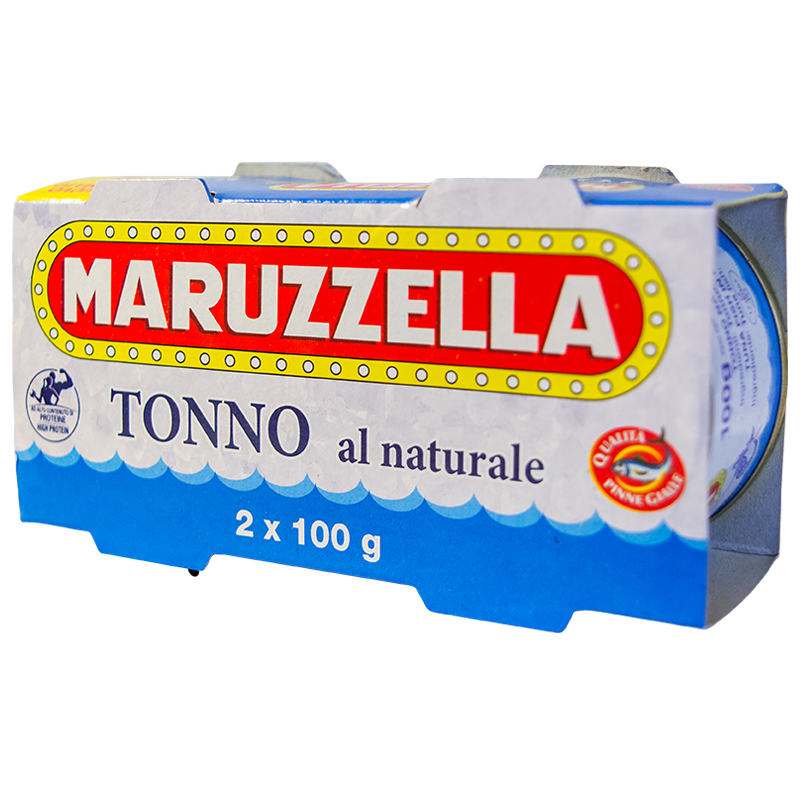 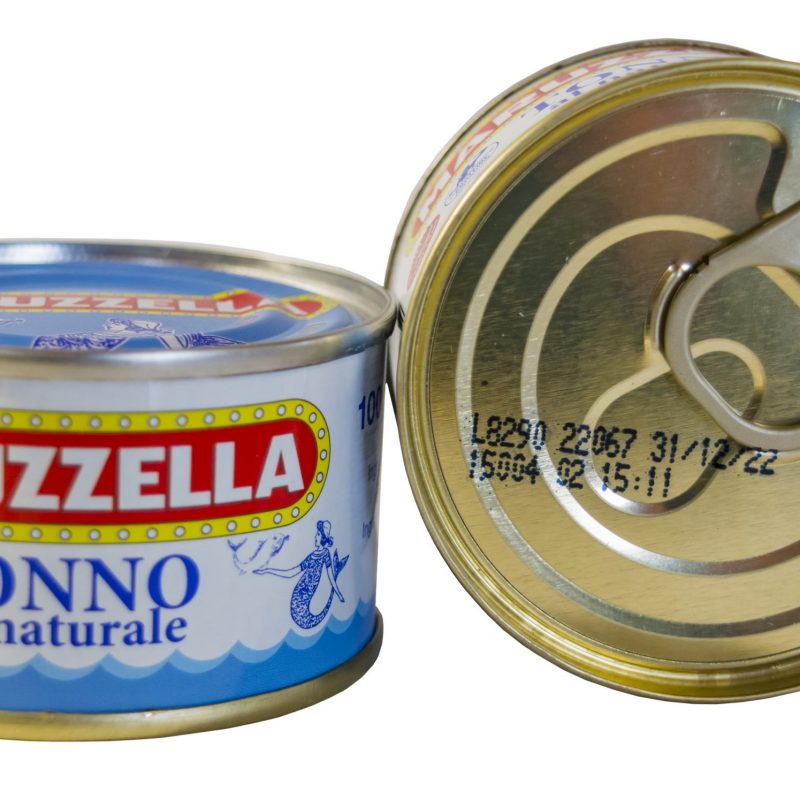 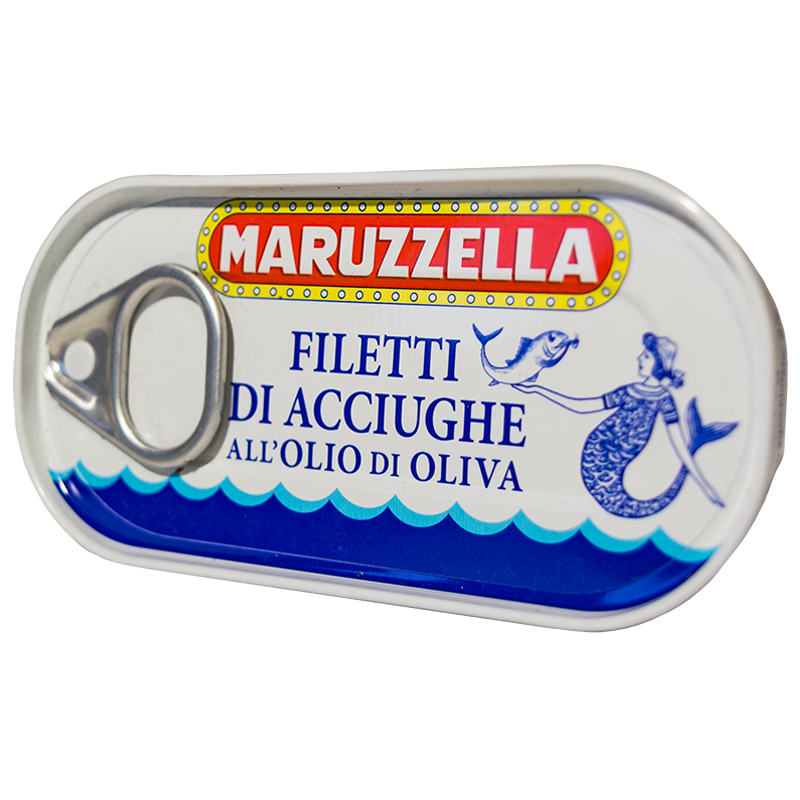 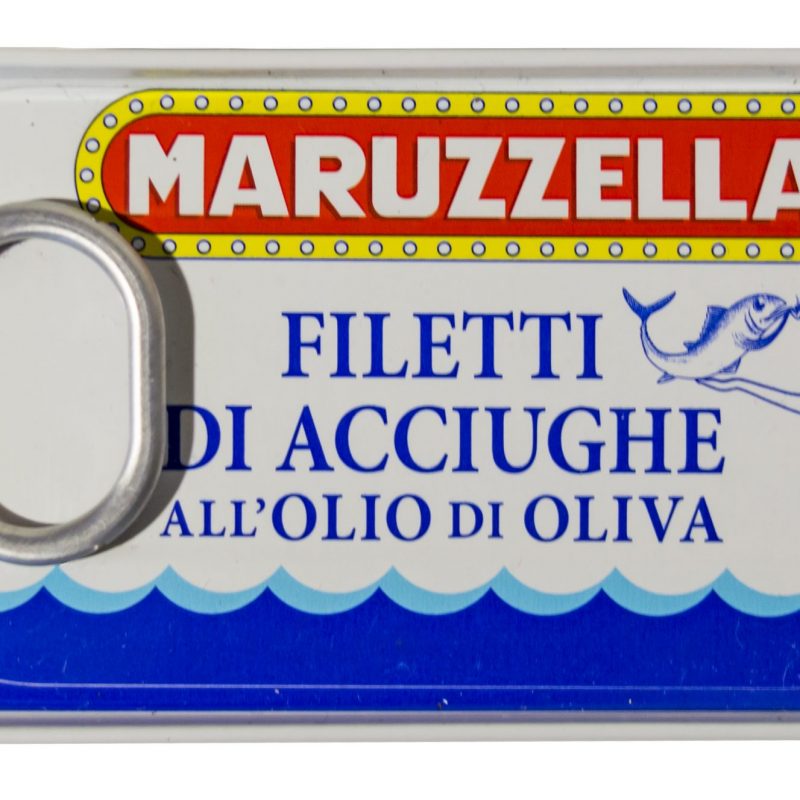 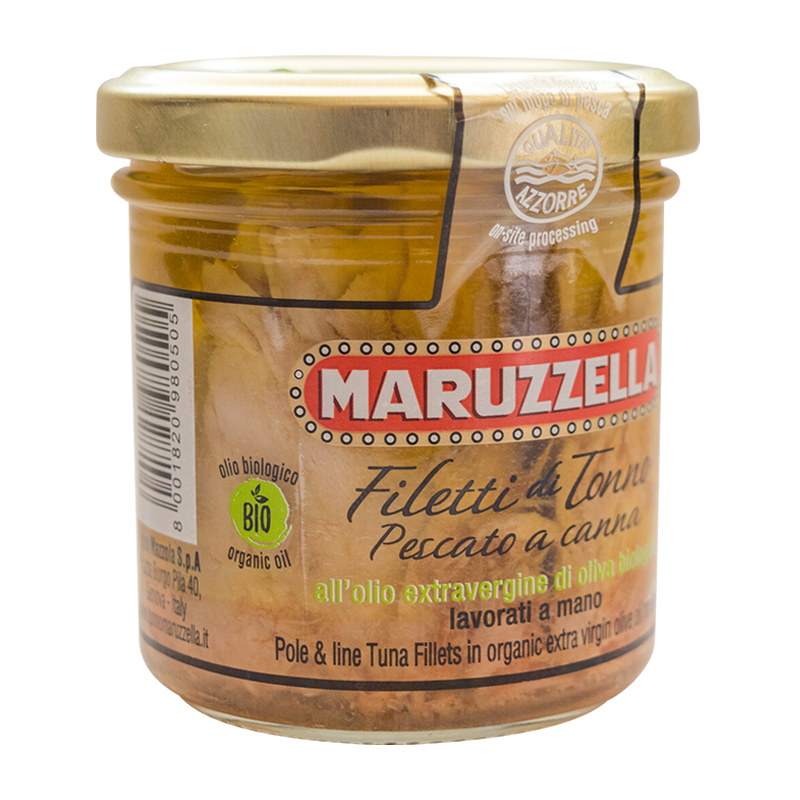 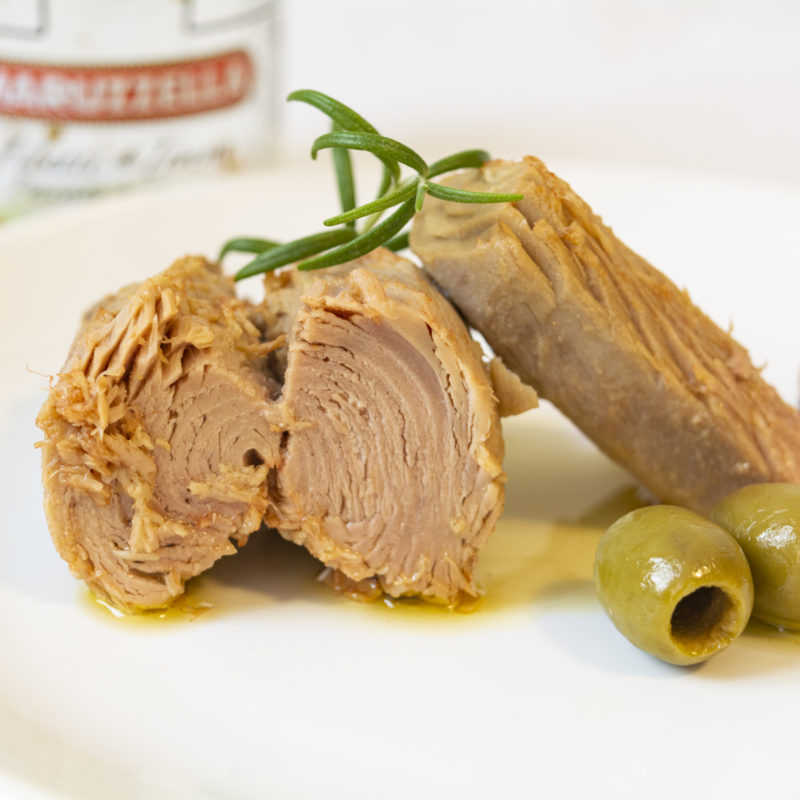 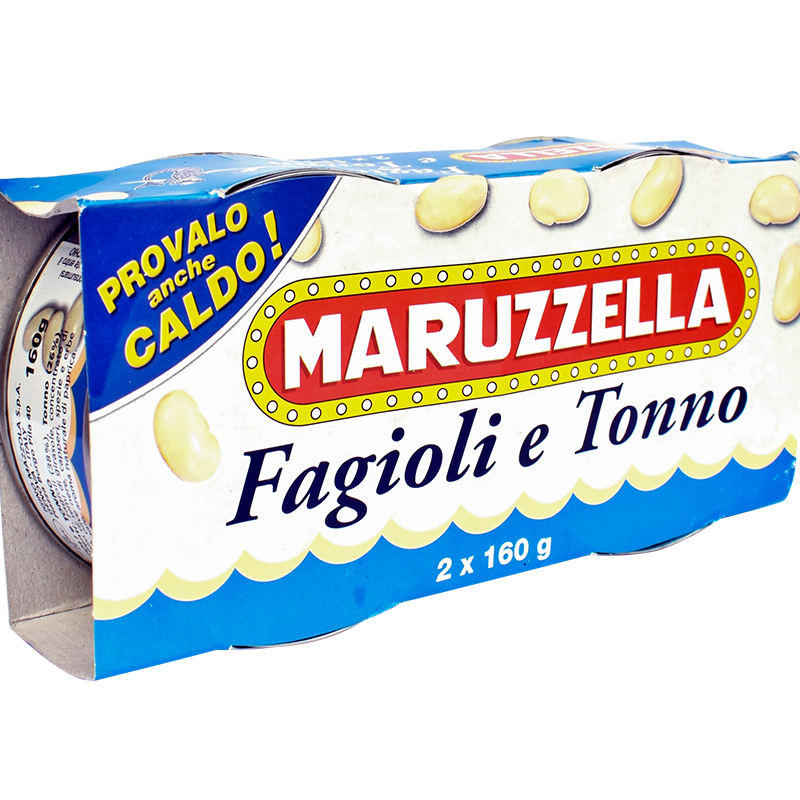 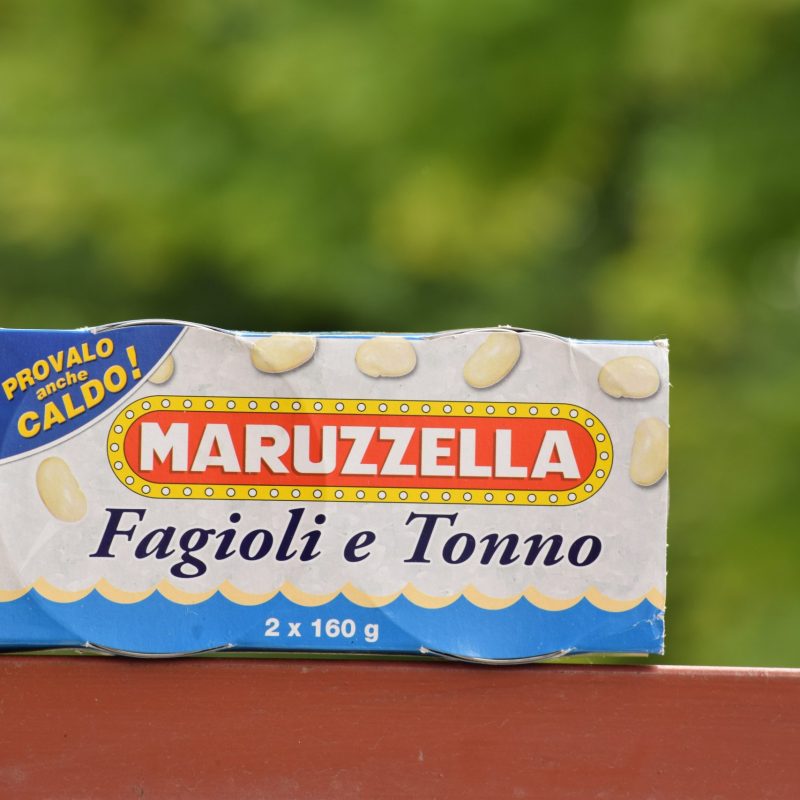 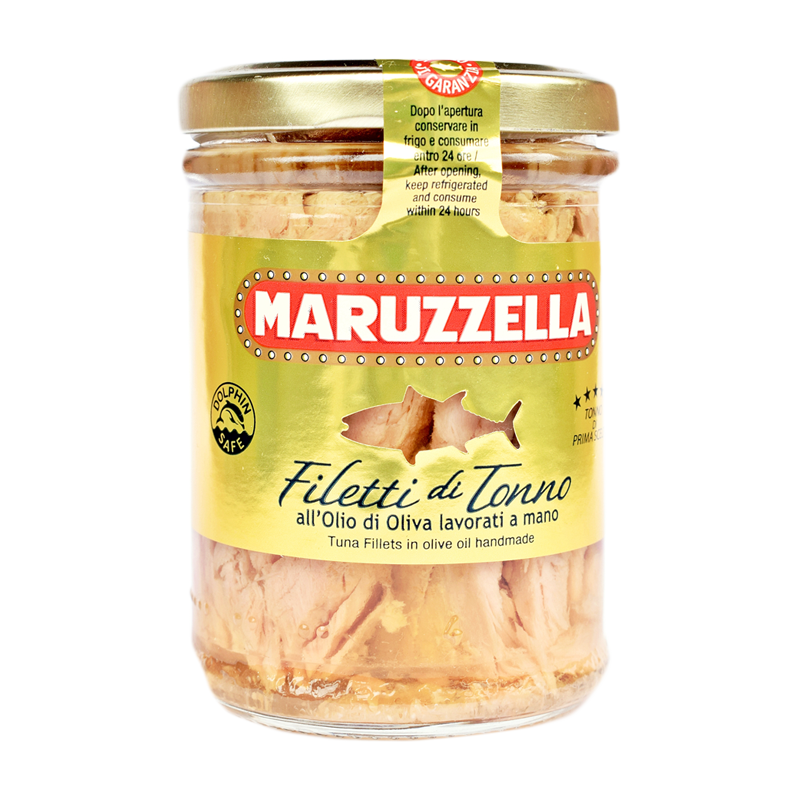 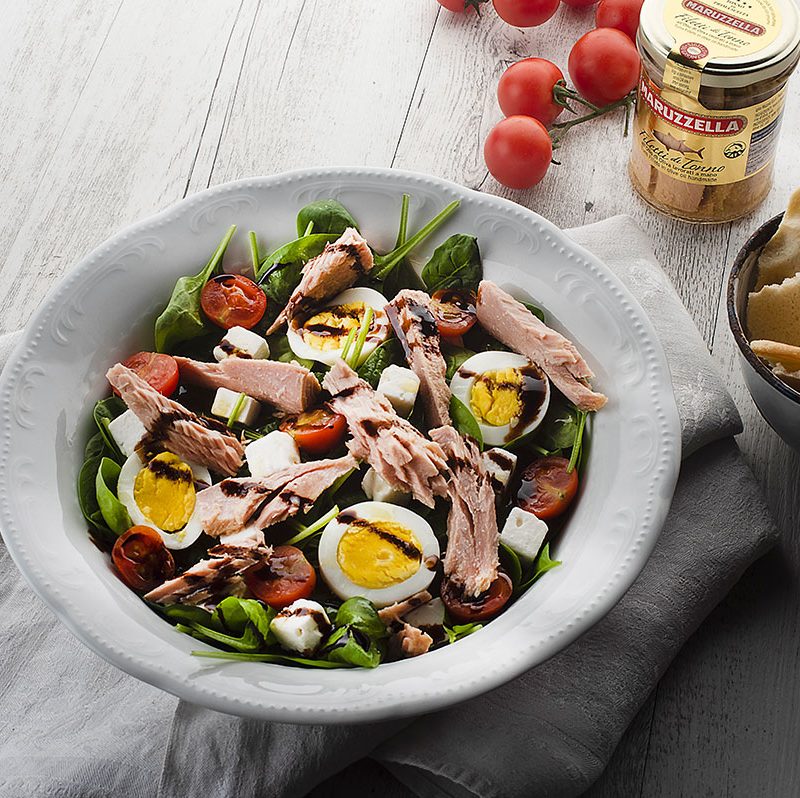 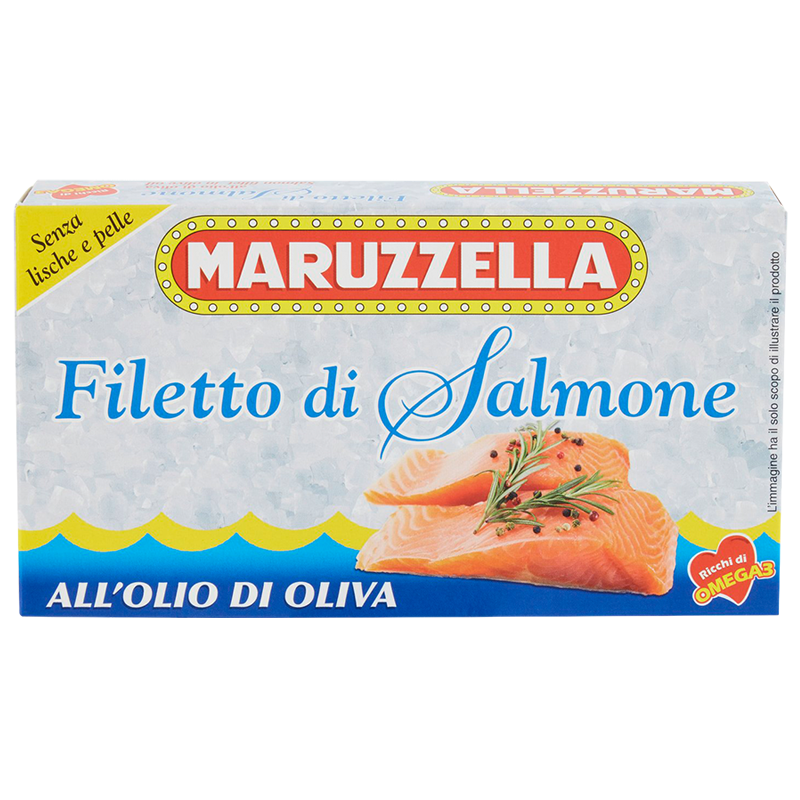 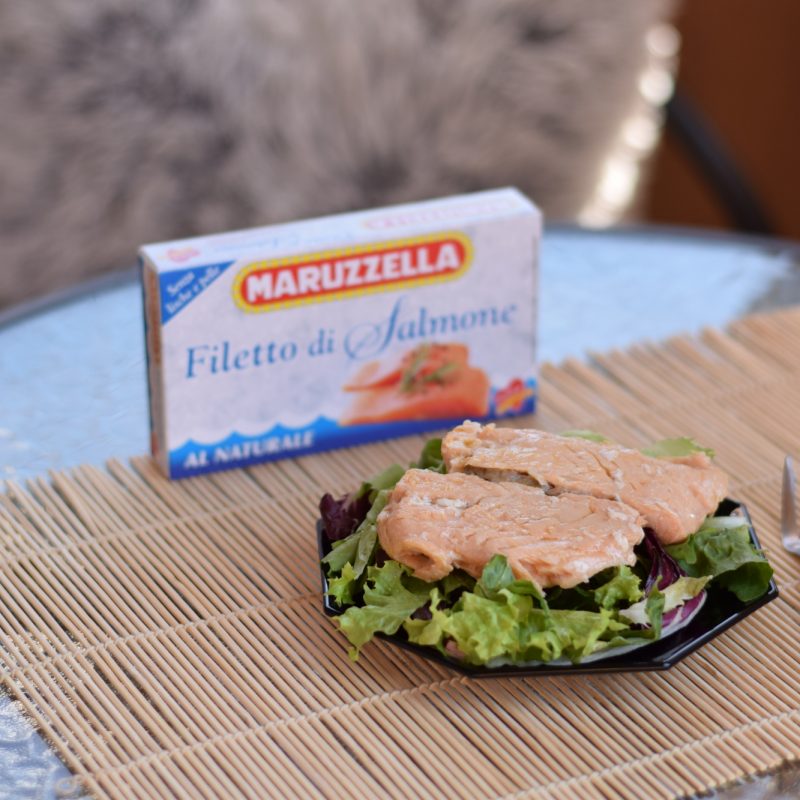 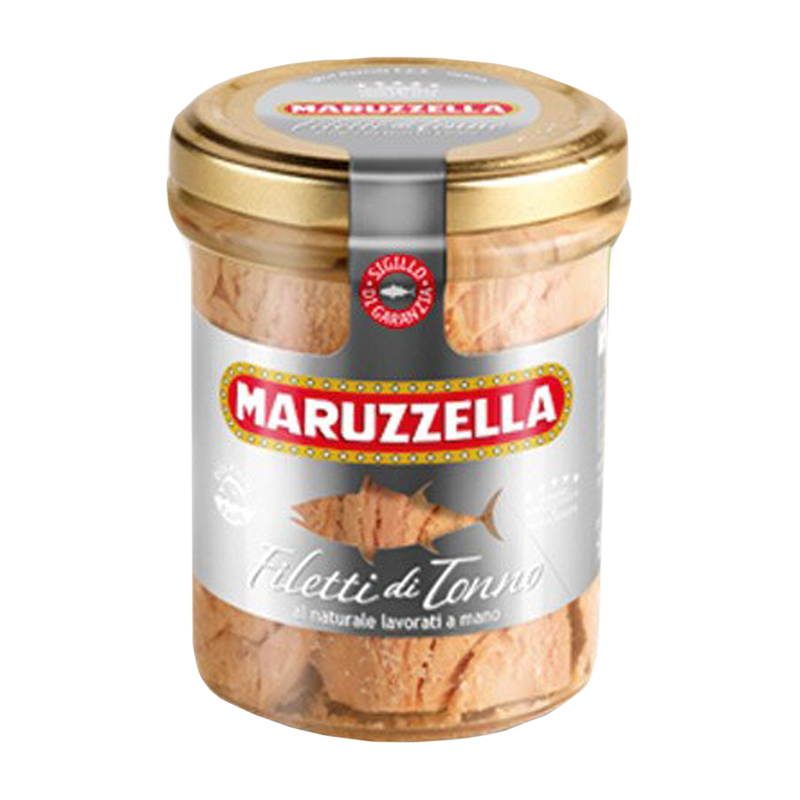 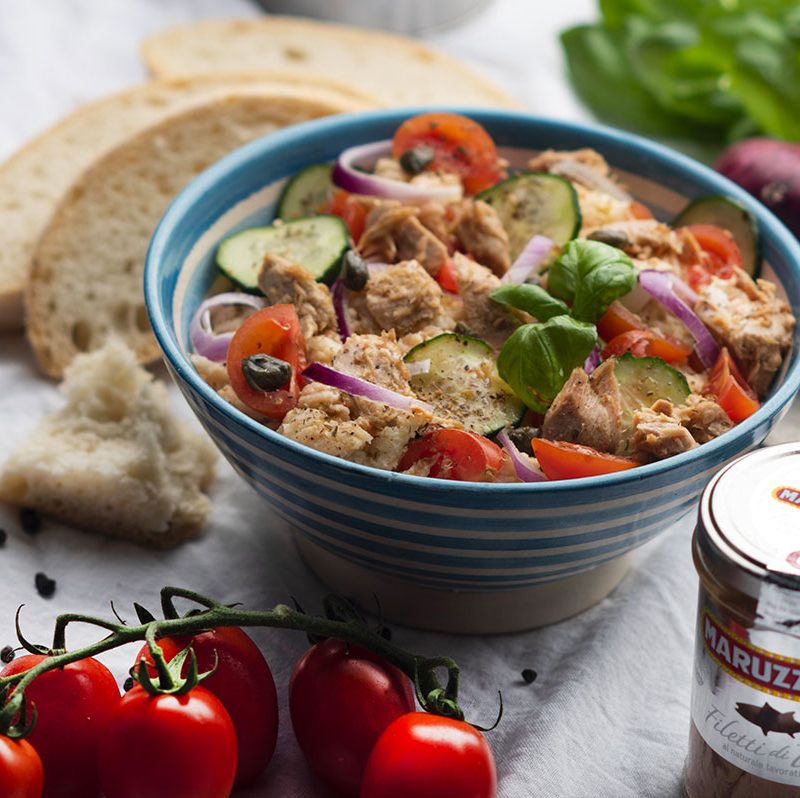 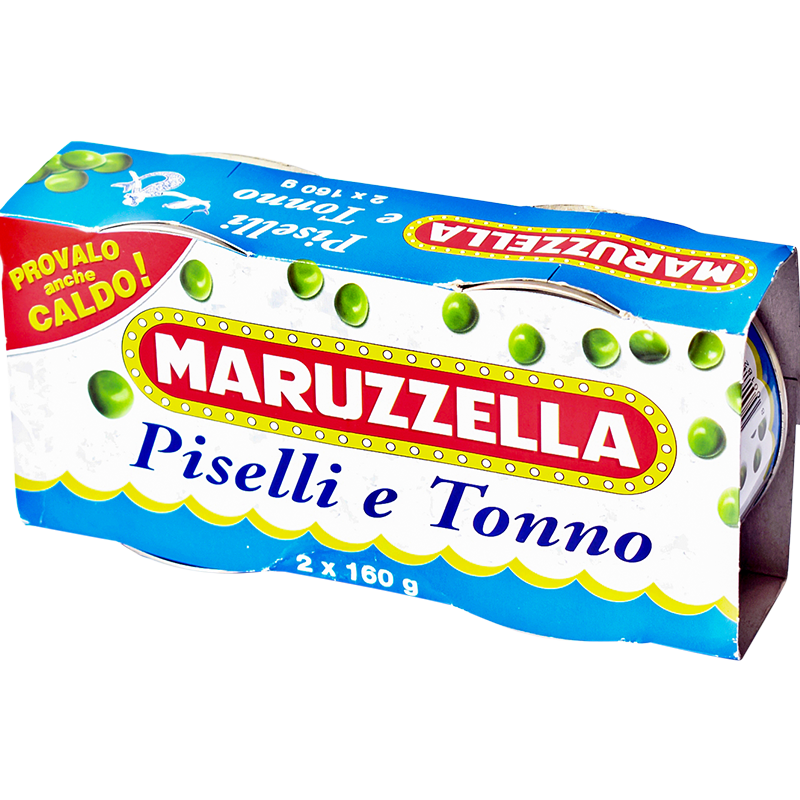 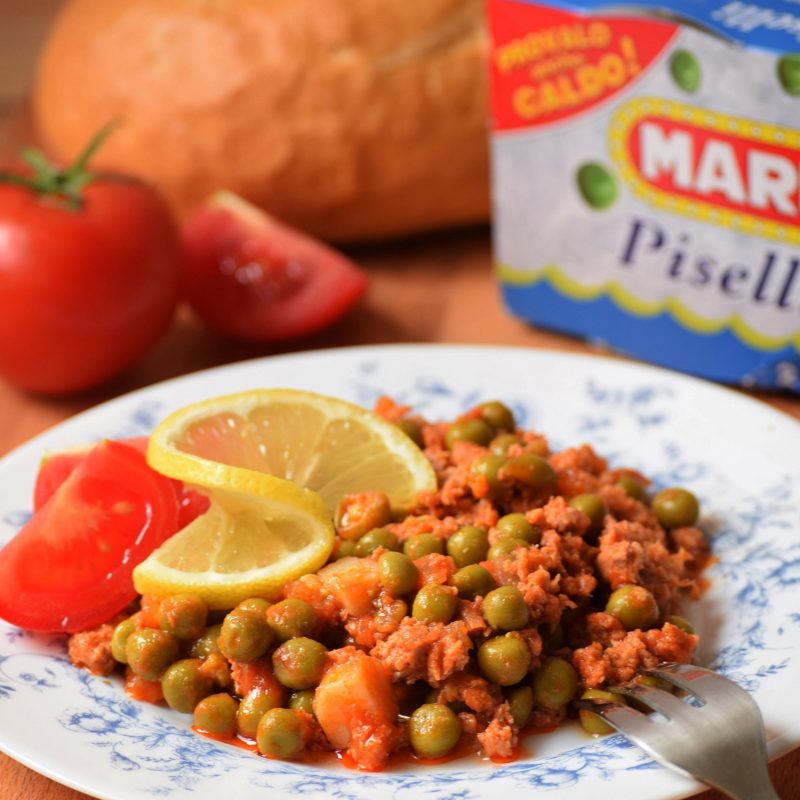 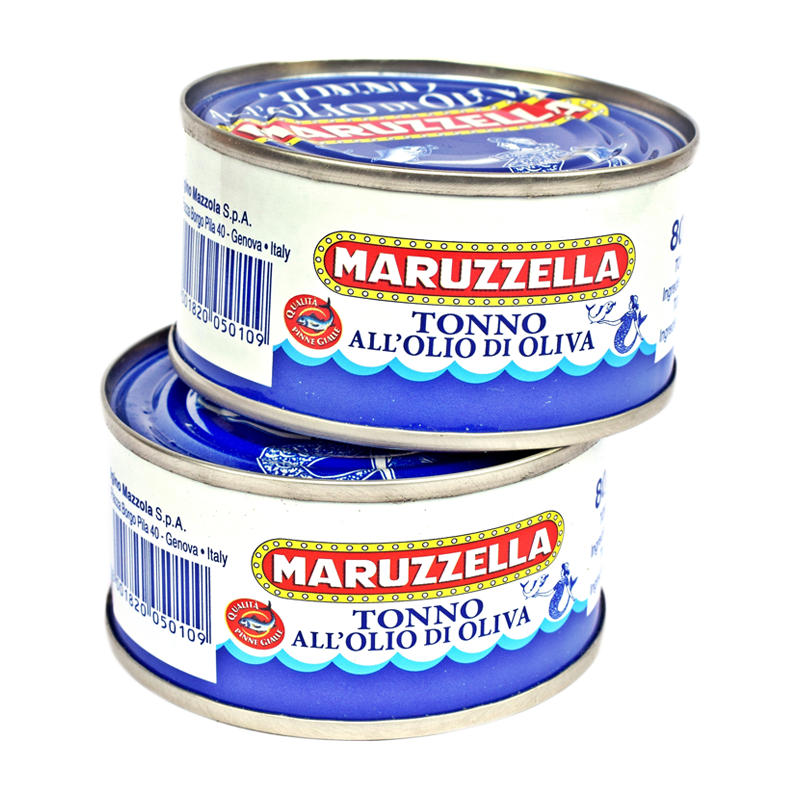 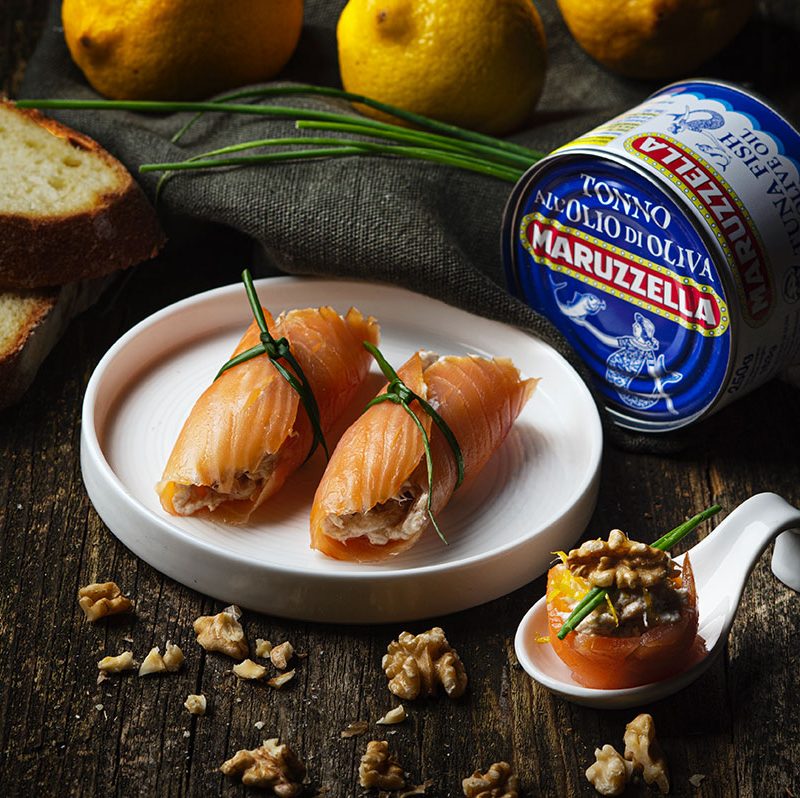 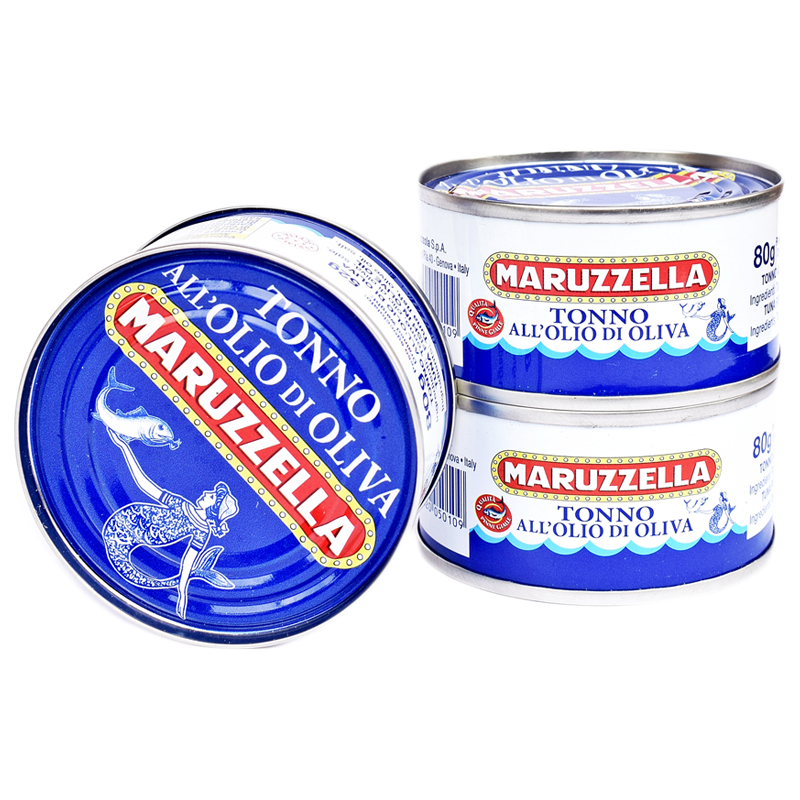 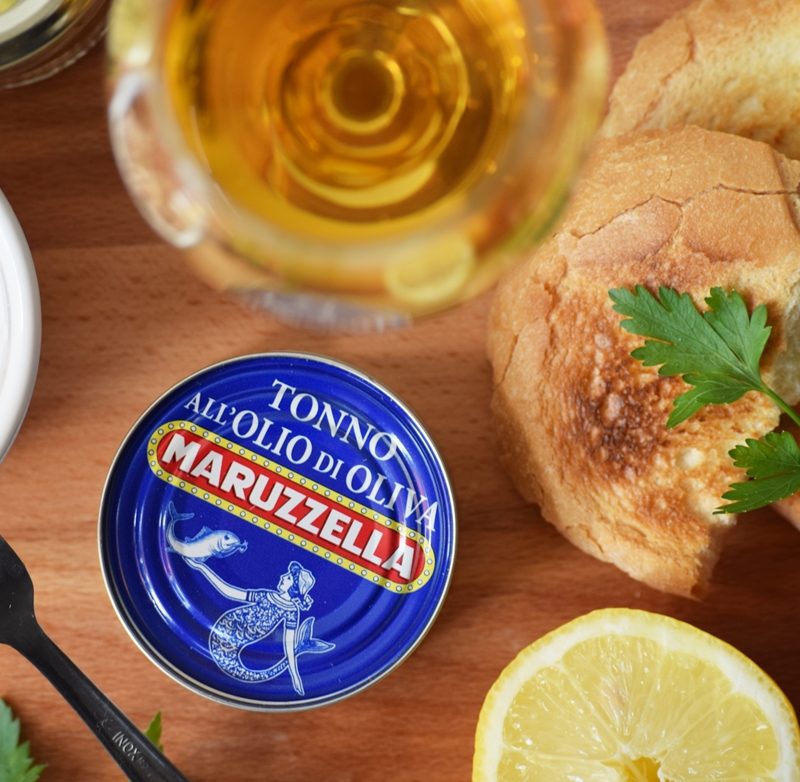 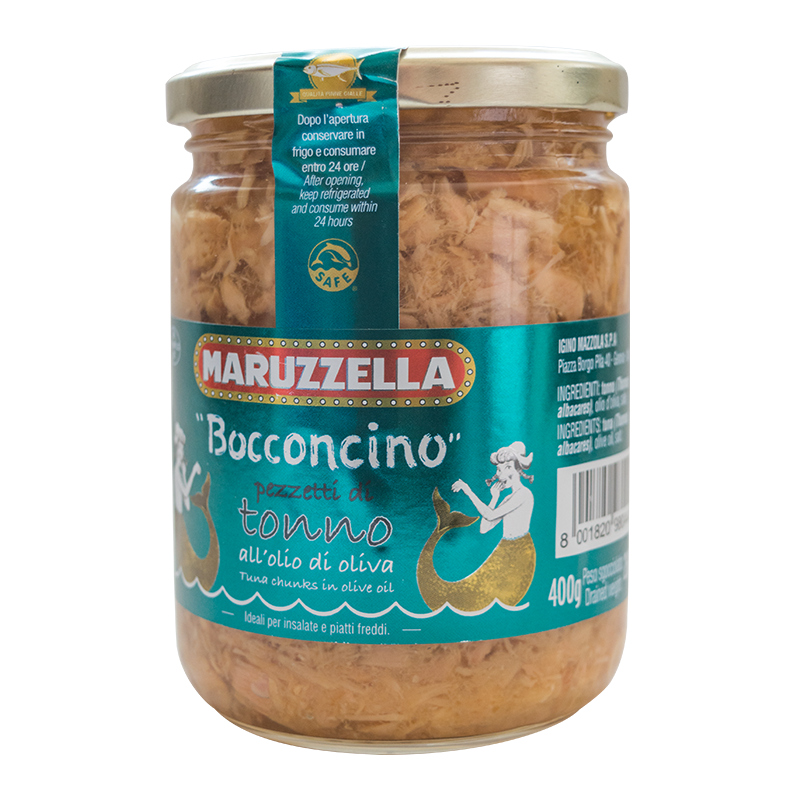 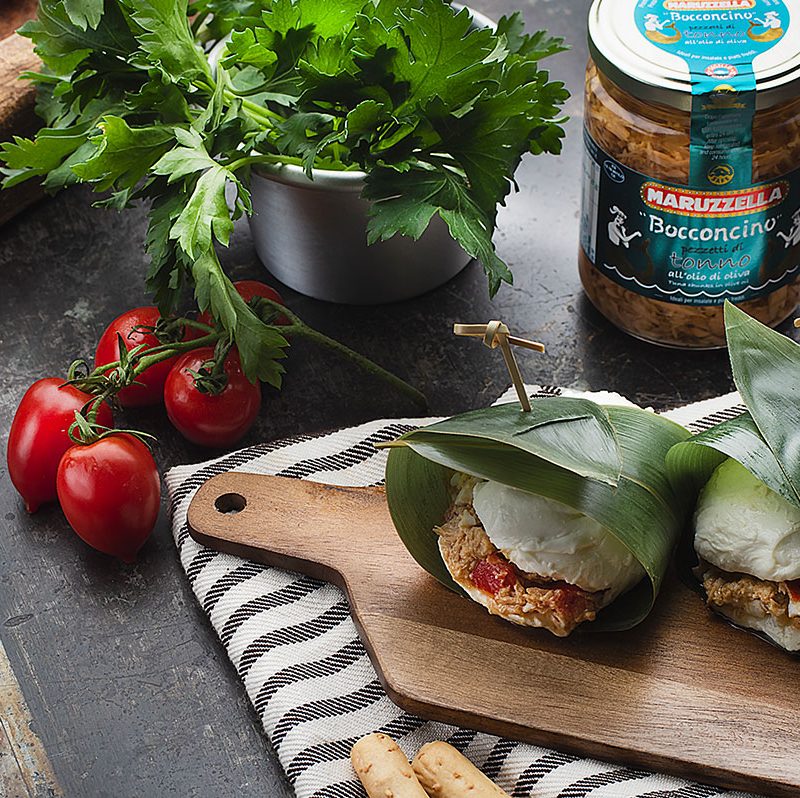 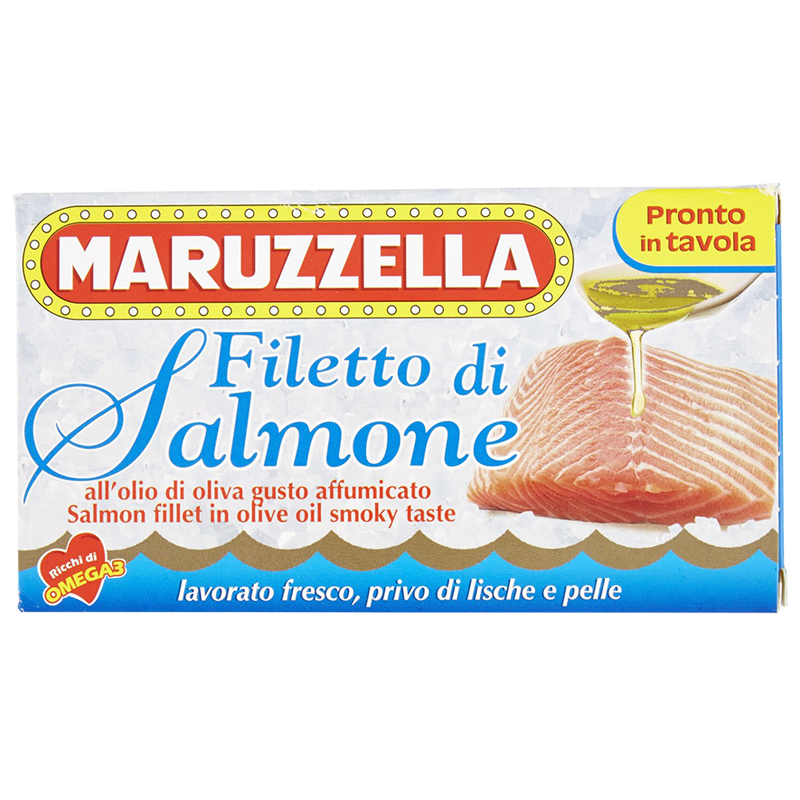 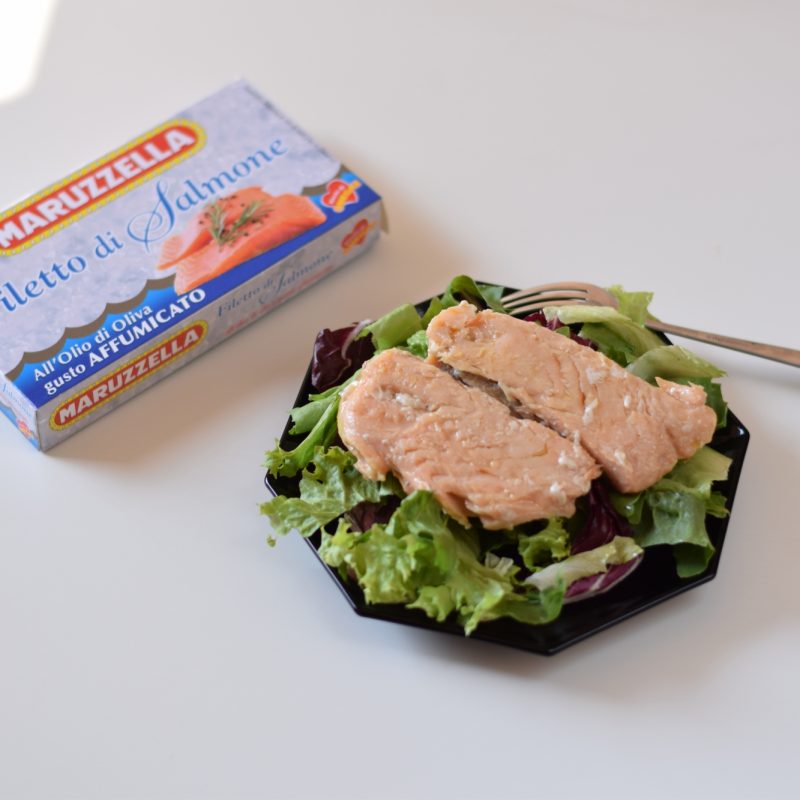 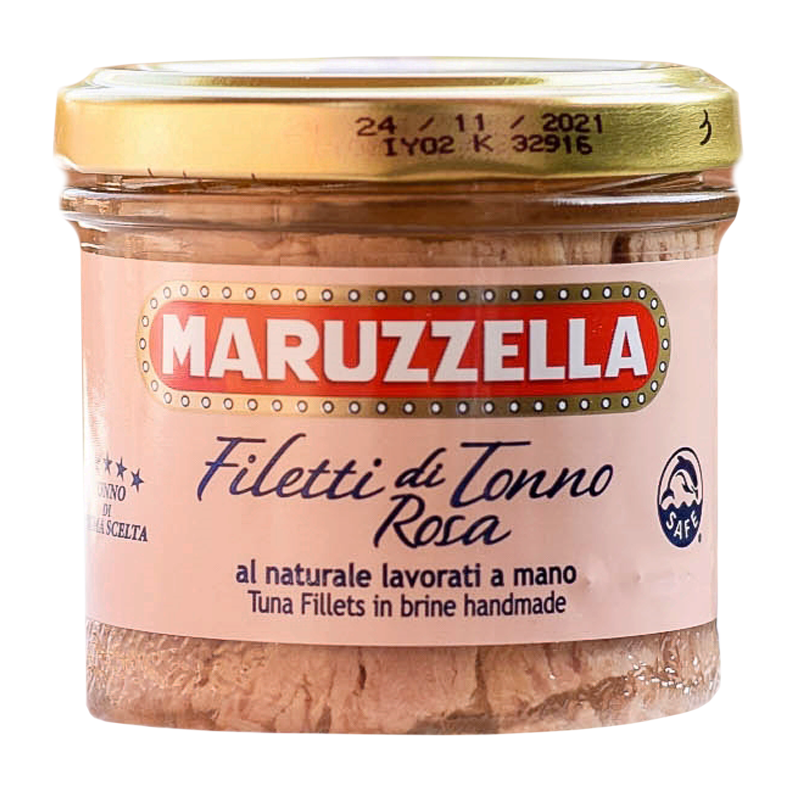 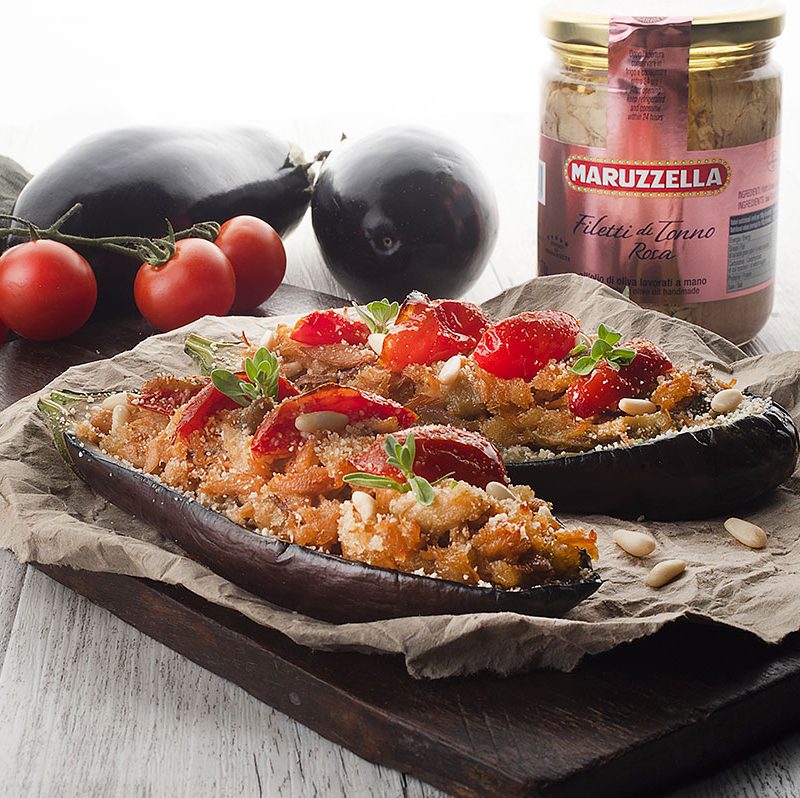 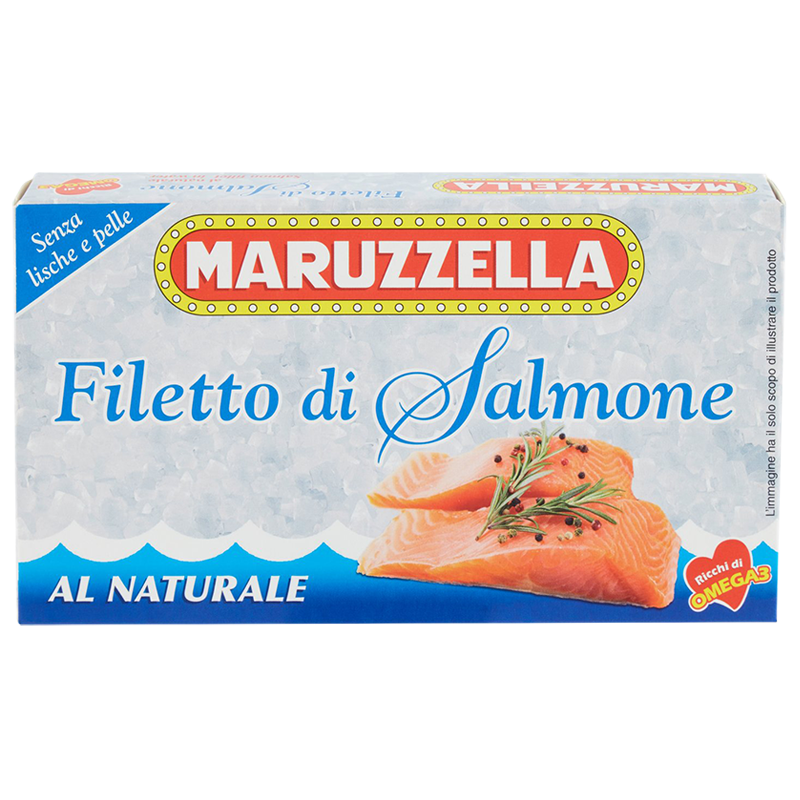 6,79 €
Out of Stock
We use cookies on our website to give you the most relevant experience by remembering your preferences and repeat visits. By clicking “Accept All”, you consent to the use of ALL the cookies. However, you may visit "Cookie Settings" to provide a controlled consent.
Cookie SettingsAccept All
Manage consent